Coronavirus Update: We are actively monitoring the status of the Coronavirus situation and the potential impacts to our customers and our business. Our focus is to maintain the reliability of energy supply for the community and ensure our critical operations remain fully operational. Our priority is the health and well-being of our employees, contractors, service providers and customers during these challenging times. For more information on Covid-19, visit: https://www.australiangasnetworks.com.au/covid-19

Please note there is no impact to our Faults and Emergency Services. For any gas leaks or emergencies please call 1800 GASLEAK  (1800 427 532)

However we are experiencing some delays for customers contacting our call centre, however we are doing everything possible to accommodate this. You can alternatively email us at agnl@agig.com.au.

To report an outage, or if you're unexpectedly without gas supply and want more information, please contact our Gas Supply Faults hotline on 1800 898 220. Read more about gas outages, leaks, and emergencies.

Renewable hydrogen can then be used in the same way as natural gas, heating homes and businesses, generating electricity and as a transport fuel. Yet it doesn’t produce any carbon emissions – only water and energy.

HyP SA will be Australia’s largest renewable gas project and the first to blend hydrogen with natural gas for supply to customers using the existing gas network.  The clean burning gas will be supplied to approximately 710 nearby properties in Mitchell Park, South Australia with a blend of up to 5% renewable hydrogen and natural gas, delivered through the existing gas network. Residents involved in the project have been informed and won't notice any change to the gas, or the price they pay to their energy retailer. It's also as safe as the current natural gas supply.

With renewable gas, we can store vast amounts of energy for later use (such as when the sun is not shining, or the wind is not blowing) and still have the superior reliability and heating performance that natural gas provides. There’s also potential for supply to local industrial customers by transporting hydrogen via tube trailers (long storage tubes on the back of semi-trailers).

The project is supported by the South Australian Government, and the State's vision to leverage its wind, sun, land, infrastructure and skills to be a world-class renewable hydrogen supplier.

HyP SA's Development Application was approved in September 2019, with the ground being broken by the Premier of South Australia the Hon. Steven Marshall MP on site in December 2019. First production at site was achieved in late 2020, with first supply of renewable hydrogen blended gas via the networks and first supply of renewable hydrogen to industry via tube trailers expected in the first quarter of 2021. 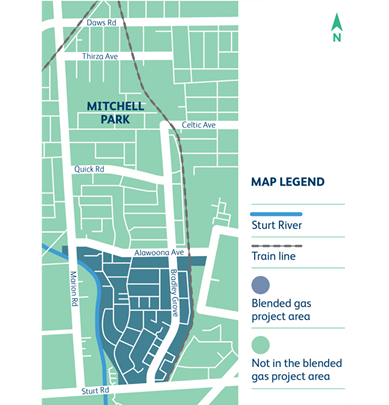 How will renewable hydrogen be produced?

Although hydrogen is the most abundant element in the universe, it’s not freely available - it must be separated from other elements. The hydrogen we produce will be renewable because it is created from water and renewable electricity in a process called electrolysis.
Renewable hydrogen will be blended with natural gas for distribution into the existing Mitchell Park gas network or put into storage. The oxygen will be released into the atmosphere. 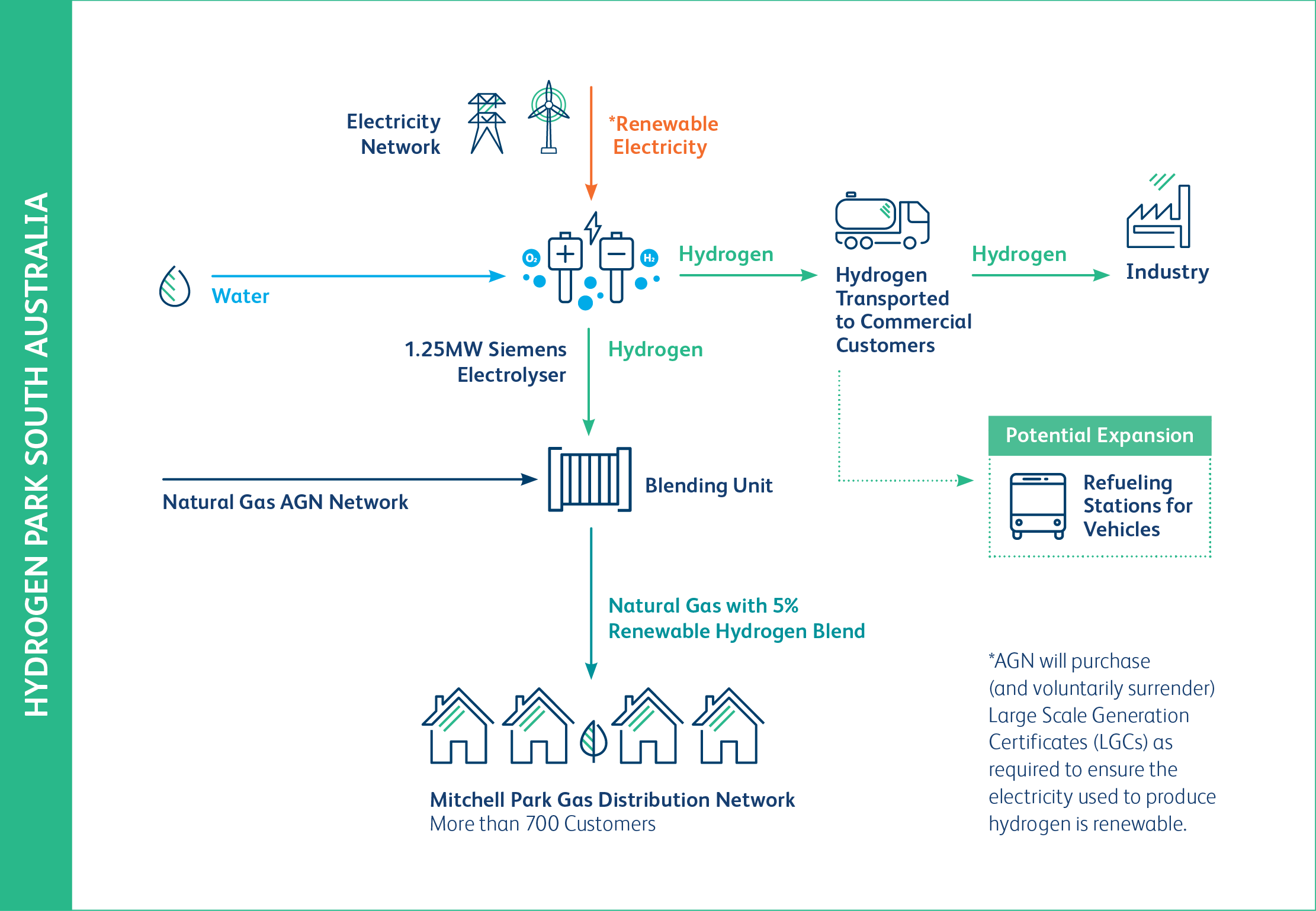 AGN is subject to regulation by government bodies designed to ensure our commitment to safety, reliability and service continue. All necessary approvals for this project will be achieved before renewable hydrogen production begins.

Read about the latest progress on our HyPSA project at https://blendedgas.agn.com.au/project-progress.

Find out more at