Renewable Gas is a term used to describe gases that can be used as a clean energy source which does not produce any additional emissions when you burn them. They can be stored easily in large volumes within the existing networks, and means customers retain the choice of energy fuel that suit their needs and improves energy security.

There are two primary forms of renewable gas

Hydrogen is not a new, magical substance. It is the simplest and most abundant element in the universe. Like natural gas, hydrogen is a colourless and odourless in its normal state.  Hydrogen like all other fuels is flammable, but like natural gas and petrol, if proper guidelines are followed hydrogen can be used safely. We are highly experienced at safely operating gas infrastructure.

Hydrogen can be used much like natural gas to heat homes, power vehicles and produce electricity, but importantly when burned, it produces only water vapour and energy as heat, with no carbon emissions.

Has hydrogen been used before in Australia?

Hydrogen is used around the world today, including industry in South Australia – for example when making steel. From 1861 until 1969, South Australians relied upon Towns Gas to meet gas demand. Towns Gas was gas manufactured from coal and consisted of 50-60% hydrogen. Today we know that blended renewable gas is the first step on our journey to lowering carbon emissions and that the cost of producing hydrogen is decreasing.

How is hydrogen made?

Hydrogen is naturally occurring but is usually found attached to other elements – for example with oxygen as water (H2O) or with carbon as natural gas (CH4). Therefore, if we want to use hydrogen, we must separate it from these other elements. There are a number of ways to produce hydrogen. The most common is to use electricity to split water into hydrogen and oxygen using electricity – a process known as electrolysis.

The electrolysis process separates the atoms of hydrogen and oxygen which are then reformed back into water vapour when you burn it, releasing energy as heat.  Electrolysers can act as flexible demand that can be paired with intermittent wind and solar to take advantage of excess renewable generation, providing value to renewable generation as well as hydrogen production and use sectors.

How much water is used to produce the renewable hydrogen?

At HyP SA we will be using a very low volume of water to produce hydrogen: about 300 litres per hour, or the equivalent of a 30-minute shower using a low flow shower head.

If we were converting all gas supplied via the South Australian gas network to hydrogen using electrolysis, it would result in an increase in the State’s water consumption of around 2%.

Biomethane is a cleaner version of biogas, that is produced by removing, or “scrubing”, carbon dioxide from biogas captured from decomposing waste products. It is also known as green gas, as it can be used interchangeably with natural gas. 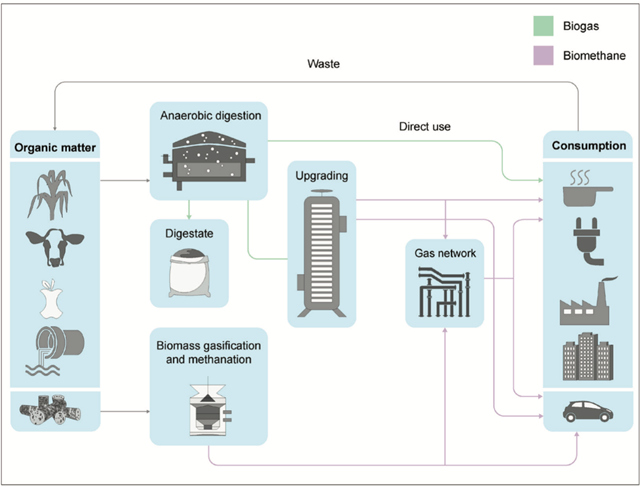 If left to decompose, waste products would release gases that are harmful to the environment, particularly methane, which has 20 times the effect of carbon dioxide as a greenhouse gas. By capturing and using biomethane, we are preventing it from escaping into the atmosphere.

Biomethane has the same chemical make up as natural gas, it can be used for the same applications, such as for electricity generation, or in the gas network for home heating, water heating and cooking.

At AGN we are working with a range of potential biomethane producers to supply into the gas network and locations around Australia.